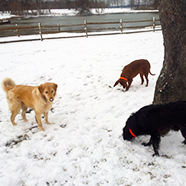 My favorite walking companion for the last eleven years has been my dog Silas. He is a peke-a-poo. His first volksmarch was at the Northern Virginia Volksmarchers event in early May 1996. He was only three months old and was carried for half the walk. This was also the first walk he ever worked at.

I was working at a checkpoint. Silas was sleeping on the chair next to me. Every time someone came up, I would stand up to stamp their start card (a personal idiosyncrasy) and Silas would do so too. He was only three months old, had just done a 5 KM walk, and needed his sleep. I began holding him in my arms on his back, just like a baby, so he could sleep while I worked the checkpoint. He slept through our whole shift.
[/testimonial]

At the Piedmont Pacers walk, at the Linganore Winery near Mt Airy MD about a year ago, Peaches did her famous 1/2 hour swim in this pond near the finish (It was quite a hot day, and I wanted the pooches to cool off). However, Peaches cooled off fast, then decided all the ducks and geese would be a lot of fun to swim after. Peaches covered every square foot of that pond, chasing the waterfowl. But she would get close, and they would just fly away!

This female walker worried about Peaches, and shamed me into trying to swim after her. She was going to do it if I didn’t! She thought I couldn’t swim. Just as I was about to enter the water, Peaches calmly swam over to shore near me. So I grabbed her and brought her to shore. My friend Marty had tried to find a boat at the start point, but to no avail. Peaches at times was breathing quite hard, and sounded like one of the waterfowl she was chasing, honking away! She also would honk hard when she would get so close to the birds, and they would fly away, and Peaches would get so exasperated! I believe I posted about this walk on the walklist and may be in your archives somewhere.
[/testimonial]

My husband’s Maltese (a male named “Angel” who believes himself a Doberman) will follow my husband Marv anywhere. He has been on about 8 10k volksmarches. The only way this is possible is for me to hold his leash and walk several yards behind Marv. As long as Marv moves, the dog moves.

We always carry a water dish. The very first walk he did was a city walk with the Mid-Florida Milers. It was all concrete, and Angel didn’t seem to tire, but when we got home, he was too stiff to walk up two steps into the house. He slept almost nonstop for two days. We don’t take him on city walks anymore. The best walk for him was in Helen, Ga. It was all soft pine needles.
[/testimonial]

My dog is a black dog and the sun really bothers him. I tried to make a cover for him out of a

t-shirt, but it didn’t work. He is resourceful in looking for shade when we are doing walks. Several people in our volksmarch club remember times when he would always be heading for shade on walks. I ended up carrying him several times on a walk in Page/Strawberry AZ because it was hot and hilly and he did want to budge.

Most of the time he is a real trooper and has been a great companion, since most of the time, it is just the two of us doing the walks. When I travel to walks, we camp out in the back of my truck which has a camper shell. I specifically bought the truck so that we could take road trips and he could sleep with me in the truck. It has worked out great.
[/testimonial]

Sherpa, my German Shepard, and I started walking while living in Germany about 7 years ago. When we first started walking, true to his heritage, if he thought we should be going faster, he started herding us along by circling the group.

Since he was on a leash, we all became very good at hopping over the leash as it came around! He did learn to become a better group walker eventually.
[/testimonial]

Expanding waistlines are a real challenge for our society. Not only can our weight make us feel bad  about ourselves, but it gives rise to a host of other health issues, like heart disease, diabetes and stroke.

If the trend of rising obesity continues, it has been estimated that, by the start of the next decade, 75% of adult Americans will be overweight. The good news is that there is a remarkably easy way to lose weight; most of us know it, we just don’t  get around to doing it. There’s no secret to it, it doesn’t cost money and it’s simple: eat healthy food and take some moderate exercise.

The trouble is that many of us can’t motivate ourselves to follow this simple advice. Modern life is fast paced and many of us don’t have the energy to prepare good food and get outside for some fresh air. Exhausted at the end of another busy day, we grab some over-processed fast food, and wile away our free time in front of a screen. Some of us have an unwitting partner in crime: our dog.

America’s dogs are suffering an obesity epidemic too. The American Veterinary Medical Association estimates that over 50% of the nation’s dogs are obese. Why? Well, we feed them over-processed cheap kibble, and then, because we are tired, we short-change them on their walks.

Many of us have large yards and it’s an easy assumption to make that the dog is managing to get enough exercise out there on its own. Or, feeling guilty, we compensate by over-feeding them. Worse, some dogs find themselves handed over to shelters when their boredom spills out into unwanted behavior. It can happen all too easily but thankfully there is a solution.

Weight Waggers are here to get you and your dog off the couch and out the front door together. Dog walking shouldn’t be yet another chore in your jam‐packed life. We are going to show you that it can be an enjoyable, energizing activity that sparks vitality and sets both you and your dog up for life-long health. It will become a habit, but one that you can actually enjoy!

You’re never going to find a more motivated and enthusiastic training buddy than your dog. Studies show that people who start walking for health are far more likely to stick to their new activity if they have a dog for a companion,  than those who walk alone, or even those who choose a human buddy. All the two of you have to do is step out together for a walk every day, and soon you will both be reaping the health rewards. It really is that simple! 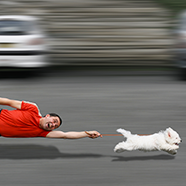 It’s easier to start a fitness regime with someone to back you up, someone who will support you and push you to go further. Someone who drags you out even if you don’t feel up to it. In that spirit, a dog is by far the best workout partner you can ever have. People who have dogs are more motivated to walk. 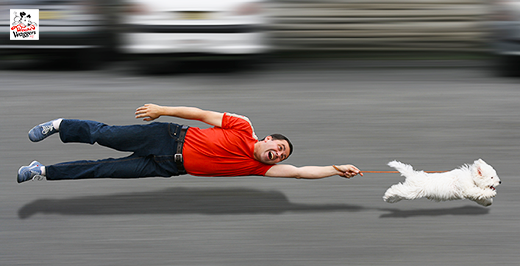 Dogs are better partners than other people, because they will always be excited to go out. They’ll push you to it. Unlike other people who might train with you, a dog can’t make excuses and skip a workout. And the dog won’t listen to your excuses either. It will want to go out regardless of how you’re feeling. That’s a level of commitment that’s hard to find anywhere else.

Going to the gym can feel like a chore, but when you’re going out with your pup, you find that it doesn’t feel like exercise anymore. Your motivation is right with you, tugging at the leash. It’s been shown that people who walk their dogs, walk more than people who walk for the exercise alone.

The end result of this activity is pretty extraordinary. Pet owners who regularly walk their dogs are 42% more likely to maintain a healthy weight than those who don’t. Three 20 minute walks will give you an hour’s worth of activity during the day.

Research has found that people who walk their dogs get more exercise than with a gym membership. On average, pet owners exercise their animals two times for about 24 minutes. Each week, they get five hours and 38 minutes of physical activity. People without dogs average only an hour and 20 minutes of exercise per week. That’s a significant difference.

Dogs have had human companions for generations. They’ve helped us survive the most difficult times. Now, they can help us by training us too. We can learn from them how to find the energy and the right motivation to get active. They will change our brains and reform our habits.

A doggy workout partner will keep you faithful in your routine, so you can both be happy and healthy!