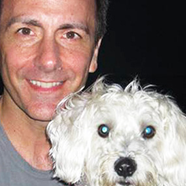 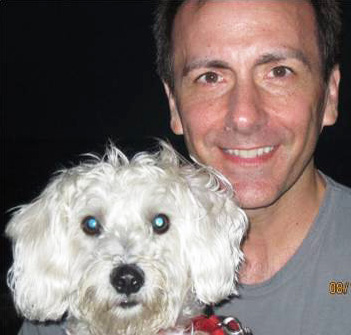 Several years ago, on a very cold winter night in Chicago, as I was driving down the alley behind my house, a little dog limped out in front of my car and stared at me as if to say “please stop, I need some help”. I did. I got out of my car and as soon as I called him, he came limping into my arms.

He had no tags, his paws were red and raw and his hair was matted. He clearly had been outside in the freezing weather for a long time. I brought him inside our lobby to warm up and called my partner to come downstairs.

My partner (NOT a dog person at the time) came downstairs. He was in the middle of making dinner and was clearly irritated that I brought in a stray off the street. He didn’t want me to bring the dog upstairs since he had just cleaned the house, and said he would come down instead. As soon as he came off the elevator and they made eye contact, everything changed. It was literally love at first sight.

We called the police to see if anyone had reported a missing dog. The dispatcher said that they would send Animal Control to come and pick him up. In the ten minutes it took for Animal Control to arrive, we both bonded with this little guy. When the officer arrived, he explained that he would have to take the dog to the local shelter where they would keep him in a crate for up to a week, and if no one claimed him, he would most likely be euthanized.

After all he’d been through, we couldn’t let this little guy go to a shelter, so we asked the officer if we could take him in until they or we found his owner. He seemed very relieved that we offered and said “yes.”

The next day, we put up notices and contacted the surrounding Animal Hospitals, etc. Well, to make a long story short, no one ever claimed him and so we decided to adopt him. We named him Harvey, after the street that I found him on.

Okay, so now we had this dog. He was a really sweet guy but a bit of a mess. Once we got all of his mats out (a feat that took several weeks,) cleared up his frost bite and ear infection, we could see what he really looked like. We determined (with the help of our vet) that he was some kind of a terrier/poodle mix. Also, now that he was feeling better, we found that he was completely untrained and on the wild side with no social skills what-so-ever!

Our next goal was to train him, or at the very least, teach him how to walk on a leash without pulling us every which way and chasing and barking at every dog, cat, squirrel or bunny that neared our path. The Catch-22 was that the only thing we knew to do to burn off his endless energy was to walk him for hours at a time. It became frustrating and exhausting.

We sought out professional advice and joined a volunteer group that donated their time training shelter dogs so that they could be adopted easier. Even some of the volunteers would roll their eyes when we brought Harvey to class, as he had a very short attention span and seemed much more interested in sniffing and playing with the other dogs than in training.

After a lot of hard work, patience, and of course, positive reinforcement, Harvey has become a wonderful addition to the family. Everyone says how “lucky” we are to have such a well trained and well mannered dog. While I feel incredibly “lucky” to have found Harvey that cold winter night, “luck” had very little to do with him being so well behaved. It took a lot of time, work and patience to make him the dog that he is today. But as we all know, anything worthwhile takes time.

We are “lucky” in the sense that life has become more fulfilling. Priorities have shifted. We spend more time outside and with each other. My partner has become more patient and tolerant toward me, Harvey and himself have let go of a futile need for “perfection.” We have a four-legged common bond that has filled our lives with joy, and a deeper sense of what’s important in life.

Harvey has also opened us up to friendships with other dog lovers and people like you who we otherwise would have never met. In a way, he’s socialized us!