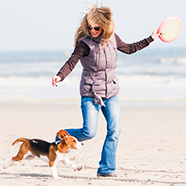 Some of you may wonder how is it posibble to get regular and sustained movement.  The answer is play!

But who’s your coach gonna be?  The answer is your dog! 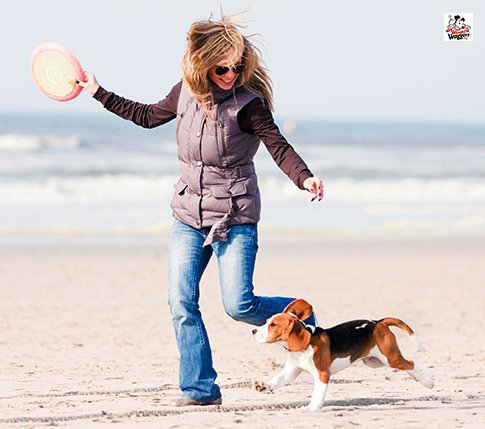 We will never get to a healthy weight without understanding that, in many important ways, humans are animals. Our minds might enjoy “playing” computer games. But millions of years of human evolution have created a body that loves to express itself through exuberant movement. Kids know this. Many adults forget.

Some adults make the mistake of trying to over-organize play. That’s why fitness programs become dull, repetitive, over-measured, soulless, or bound up by teams and rules. Your dog isn’t buying it.

If it’s fun, you’ll do it more. Walking with your dog is fun for both of you, especially if you mix it up and respond to your dog’s naturally playful spirit.

One of Weight Waggers’ favorite writers is Frank Forencich. He has a degree in human biology from Stanford and has taught martial arts and functional movement for 25 years.

But he’s not too proud to learn from his dog.

Here are a few excerpts from his fascinating and original book Exuberant Animal: The Power of Health, Play and Joyful Movement. Weight Waggers recommends the entire book.

“My dog’s name is Mojo…. His fitness program is truly amateurish…. He violates all the rules. When he exercises, he doesn’t warm up or cool down. He doesn’t check his heart rate and he  never measures his body fat percentage….. He doesn’t keep a spreadsheet and he never bothers   to log his progress. He has no performance objectives….

Not only that, Mojo is completely apathetic about competition…. If he gets tired, he rests. If he gets hot, he seeks out shade. If his paw hurts, he slows down.

According to everything I read in the fitness and sports medicine press, Mojo out to get in terrrible condition…. But no, it’s not like that at all…. He’s got great muscle tone and a slender waist.

He does adhere to one basic rule. That is, he tries to get moderate to vigorous activity on most days of the week. That’s it. Aside from his obvious preoccupation with play and pleasure, this is his only rule for fitness. “(p. 232-233)

Real play begins in the body and involves movement

In 2004, Forencich interviewed his dog, Mojo, one of the “preeminent voices in the field of play philosophy” who has won “numerous awards for his work in the field of cross-species play.”

Forencich: So what about humans then? Do they play too?

Mojo: Well I assume they do, but it’s really hard to tell sometimes. They aren’t like other animals, that’s for certain. Sometimes aney run and jump like normal critters, but a lot of them just sit there, for hours on end, hardly doing anything at all. I worry about them….

You humans are so dense sometimes. The point is that play begins in the body and that it involves movement…. All other forms come from that. You might say that you’re playing in some other way, but if you’re not moving your body, you’re missing out. You might be playing with all of your objects and tools and and sounds that you make, but if you don’t actually move, you’re missing the best part. (p. 209-212)

Learn more about Forencich and his books.